Wetlands are usually known locally in Western Victoria as swamps. One of the attractive things about wetlands is that they are complex systems which have an intricate array of interactions between their species and the environment. The Glenelg Hopkins CMA gives information and links here about the types of wetlands in our catchments.

There are more than 1200 wetlands in the H11 H12 catchments. Some the characteristic features of our wetlands are that in general they are endorheic (having no drainage outlet), they are temporary (wet in winter, dry in summer), and the majority of them are freshwater rather than salty. Their shallow temporary nature means that they do not have a well defined boundary. It is not uncommon for them to remain dry for a number of years. 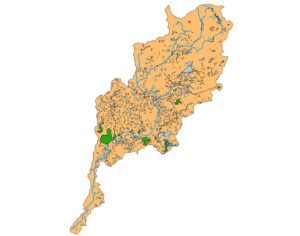 Wetlands in the H11 H12 catchments are among those that have been recognised as having high biodiversity values. In 2012 they were included under the Federal Government’s listing of Seasonal Herbaceous Wetlands (Freshwater) of the Temperate Lowland Plains under the Environment Protection and Biodiversity Conservation (EPBC) Act. They were assessed as having met the listing criteria as being critically endangered ecological communities. Threat abatement and recovery plans are an area of current interest. A range of information about management options for wetlands is included in the Toolbox menu of this website (link).

How do our temporary wetlands compare on a world scale?

Wetlands are disappearing on each continent. Seasonally dry, inland wetlands are the most affected. The figure below is derived from 189 reports from around the world, and shows the estimated global decline in the number of wetlands since 1700 (from Davidson 2014).

Temporary wetlands in temperate climates around the world are often found in areas of high human population density. Some of the major regions where they still exist include in the Mediterranean basin from (southern France to northern Africa – Algeria, Tunisia, Morocco) and in southern United States of America (Texas and California). There are some major organisations in these areas that have been researching the management of threatened wetlands for a number of decades.

A plant identification and wetland management handbook has been produced for seasonal herbaceous wetlands by the Goulburn Broken Catchment Management Authority. A pdf copy can be downloaded here.

Current and Future Risks of Cropping Wetlands in Victoria. 2016.
https://www.water.vic.gov.au/waterways-and-catchments/rivers-estuaries-and-waterways/wetlands/managing-wetlands

Davidson, N.C. 2014. How much wetland has the world lost? Long-term
and recent trends in global wetland area. Marine and Freshwater Research
http://dx.doi.org/10.1071/MF14173