Lake Bolac appears historically to have been a complex wetland system, with areas of open water, a lunette on the south-east side, with areas of steep banks and low-lying marshy ground. It is fed by the Fiery Creek, and flows into  Salt Creek and away to the Hopkins River. The lunette on the south east of the Lake Bolac basin is formed from wind-blown sand that came down the Fiery Creek from the hills in the catchment. This lunette naturally partly blocks the outlet, and allows the water to be retained in the lake, until the rising water breaches it at its western edge, and water then flows away south in the Salt Creek. 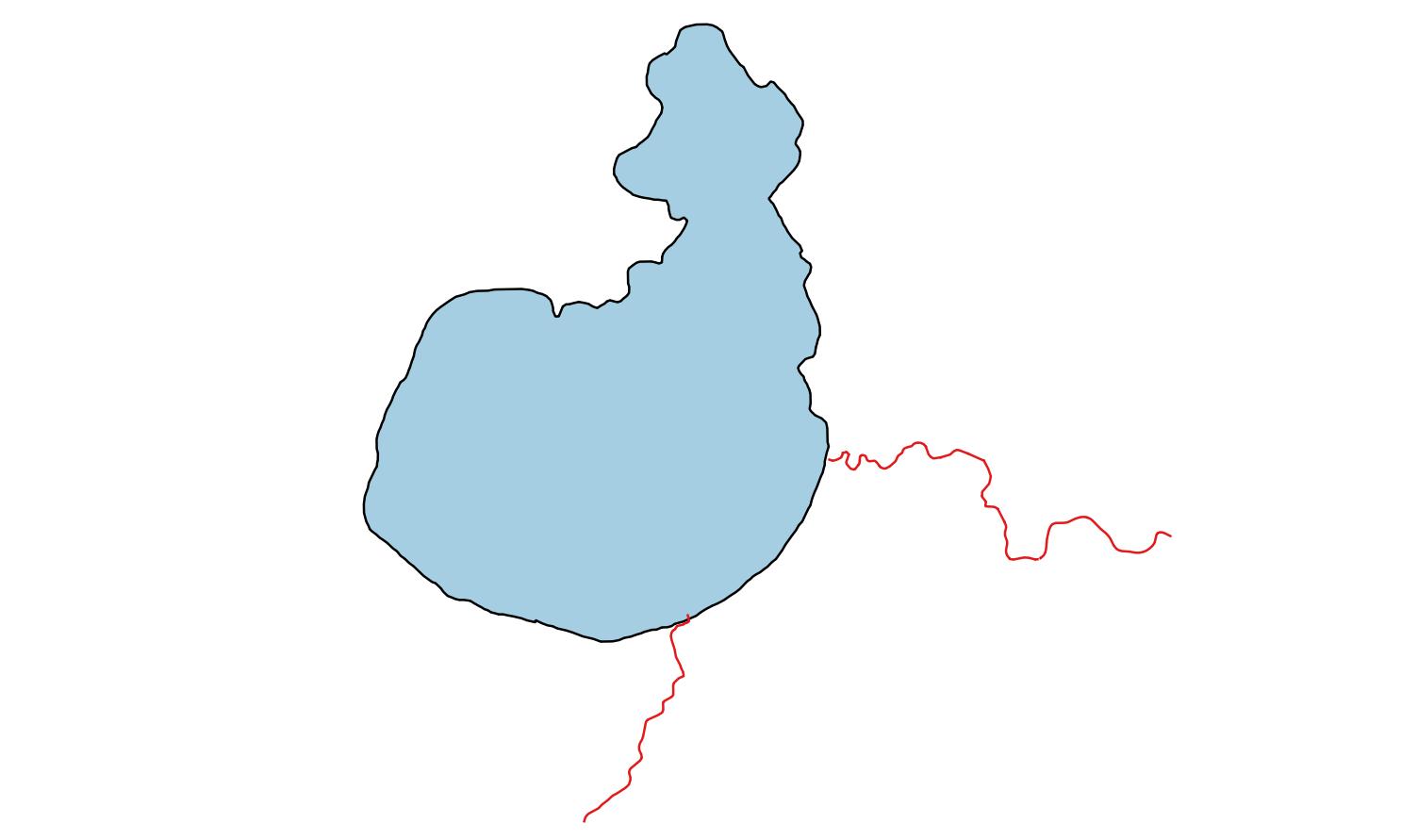 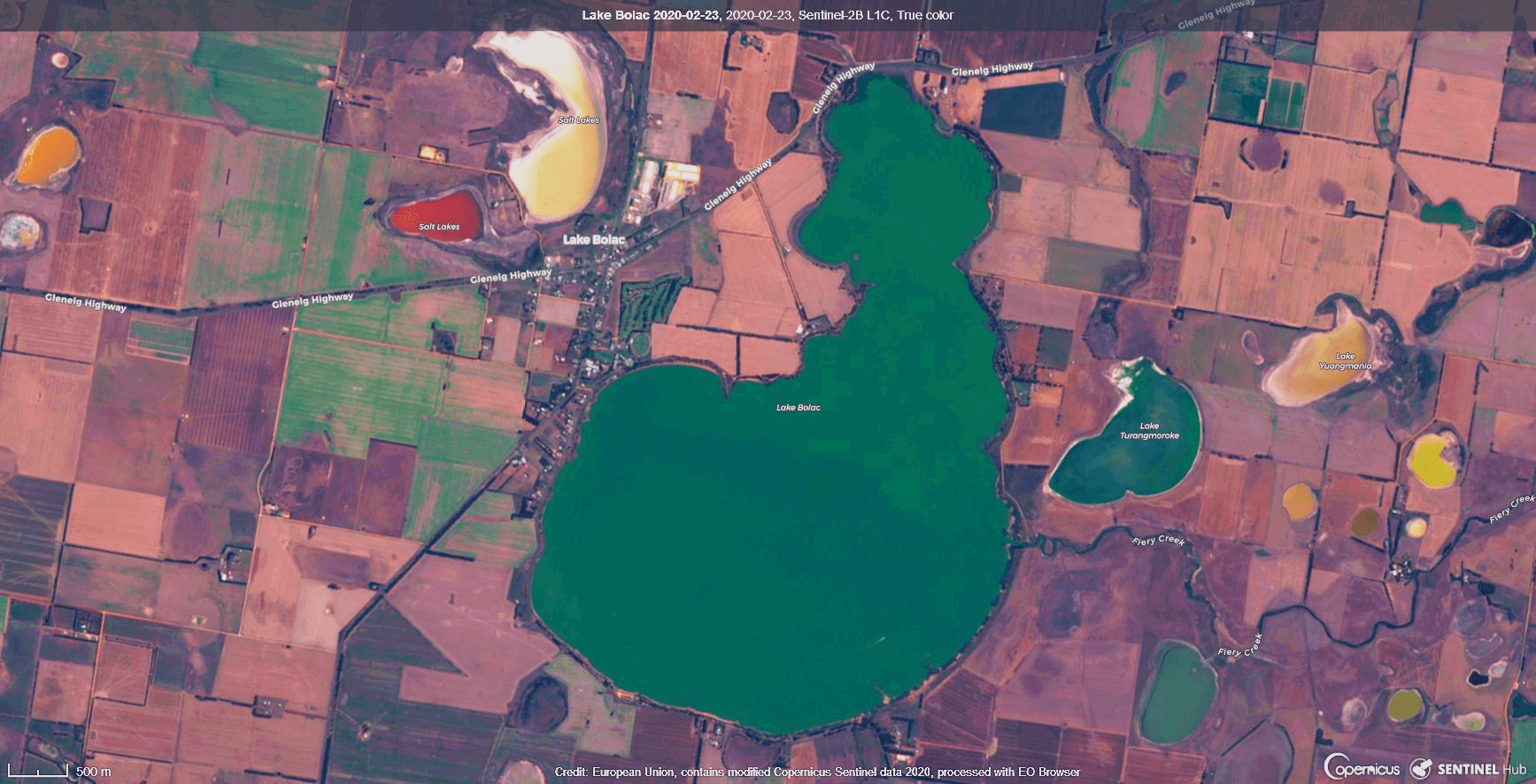 The lake was characterised by an episodic nature, similar to a seasonally opening and closing estuary system, as its exit was sometimes blocked by lunette formation and sand accumulation. When the lunette was breached, the lake could drain away, and is likely to have eroded its own channel before spreading out into wetlands below the lake. This means that the lake would dry out occasionally. We know that it did from settlers records and the presence of the wind-blown lunette. Lunettes can only form when a lake is dry. When the lake was dry wind would develop and enlarge the lunette, and accumulating sand would block the exit, cutting off the flow to Salt Creek. When flow returned to the Fiery creek the lake would fill up, and eventually breach the lunette again. It is likely that the position of the outflow varied from time to time and event to event, depending on the amount and location of the accumulated sand. The indigenous saying ‘Long time wet, long time dry’ probably describes the water regime well. 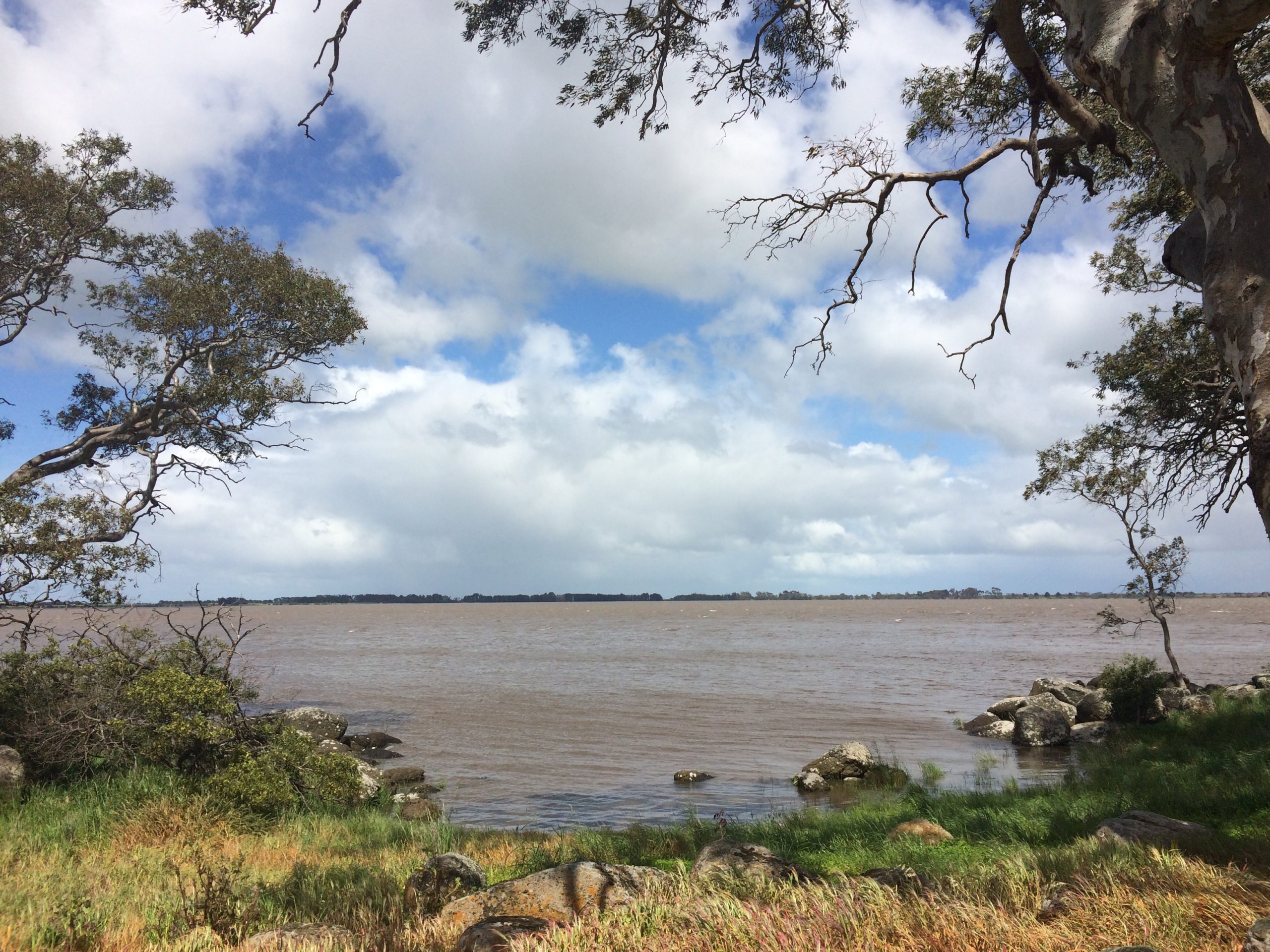 Deep soil cores to more than 4 m have been taken recently from the beds of Lake Bolac and nearby Lake Turangmoroke (Cook et al. 2011). These give some tantalising glimpses into the vegetation and climatic conditions for this region, including up to 90,000 years ago. The oldest slices of cores contain fragments of grass ash. A relevant overview of the vegetation, climate and water conditions over the period of time between 90,000 to 15,000 years before present is given by Cook (2009). Much of the early time had an “open woodland dominated by Allocasuarina luehmannii type with low numbers of Banksia, Eucalyptus and other Myrtaceae" with a diverse understory. The region changed to an open grassland with less water and more saline conditions about 47,000 years ago. The driest conditions in the period studied were between 18,000 and 11,000 years ago, when the dry bed of Lake Bolac blew with wind erosion to form the lunette on the eastern bank. Acacia verticillata (prickly Moses) was common from then onwards.

Cook, E.J. (2009). A record of late Quaternary environments at lunette-lakes Bolac and Turangmoroke, Western Victoria, Australia, based on pollen and a range of non-pollen palynomorphs. Review of Palaeobotany and Palynology 153(3):185-224

Summary of the proportion of woody to herbaceous vegetation in the Lake Bolac region over time, back in time to approximately 90,000 years ago (Cook et. al 2011). 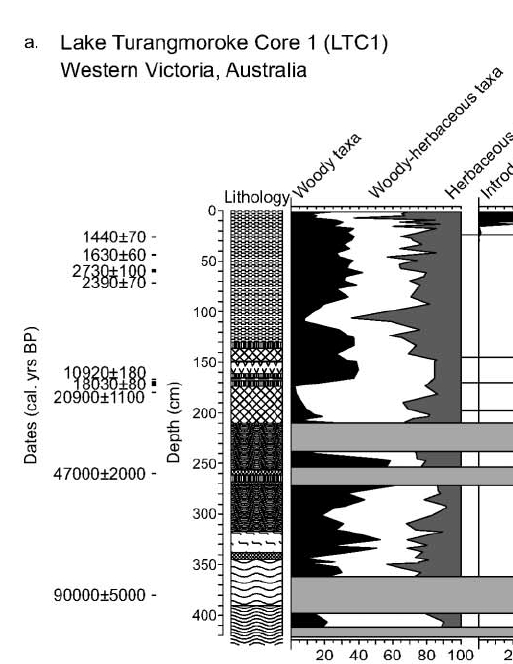 Research carried out in the 1990s has given us an insight into the environmental conditions around Lake Bolac over the previous thousands of years (Crowley and Kershaw, 1994). This information comes from pollen in soil cores that were collected from Lake Turangmoroke, which sits adjacent to the Fiery Creek inlet to Lake Bolac. This part of western Victoria has experienced long-tem fluctuations in climatic conditions. There would also have been marked changes in salinity and in the incidence of fires across these periods.

About 12500 years ago was an arid period with rainfall of less than 250 mm/yr, when the base of the dried out lake blew in strong winds to add to the lunette over the eastern shore. At this time the vegetation was dominated by heath and grassland.

The climate was much more damp and warmer from roughly 11000 years before present. During that time casurina forests were more widespread. This gave way to an increase in eucalypt vegetation from about 8000 years ago.

There was a regional decline in rainfall about 3900 years ago in the late Holocene. At that time a barrier formed between the Fiery and Lake Bolac, and the inflow became a permanent swamp. It would then have acted as a nutrient filter before the water made its way into the lake. There is evidence that indigenous occupation near the lake became more concentrated after that time. In the filling part of the cycle the lake would have backed up and flowed out over low-lying areas where the Fiery Creek enters, creating an extensive wetland system adjacent to the areas of open water. These swampy wetland areas, the low gradient of the creek at the inlet area, the deposition of sand as the water slows down, would have provided habitat for lush, productive and reedy wetlands. The water plants and the residence time of water would have meant that the water was substantially filtered of particulate matter and nutrients before it entered the lake. The surrounding wetlands would have provided an amazing habitat for birds and fish.

The soil cores showed that there was an abrupt change in environmental conditions when European occupation occured. This includes large increases in soil erosion in the catchment and higher salinity. There were also rapid changes in plant species, including an increase in grasses.

Since the channelization of the inflow and artificial building of the barrier on the outflow (‘The Overflow’), water is likely to have had a longer residence time in the lake. Fine clay sediments from the erosion of the banks and wetlands in the catchment have been deposited in the lake and are dispersed in a layer across the lake bottom. When the lake dried out it was possible to detect the original lake floor as a harder, grainer layer beneath the fine, sloppy mud.

Aerial photograph of Lake Bolac from 1946. Much of Victoria was photographed at that time, and the maps can be found on the Trove site of the National Library of Australia. 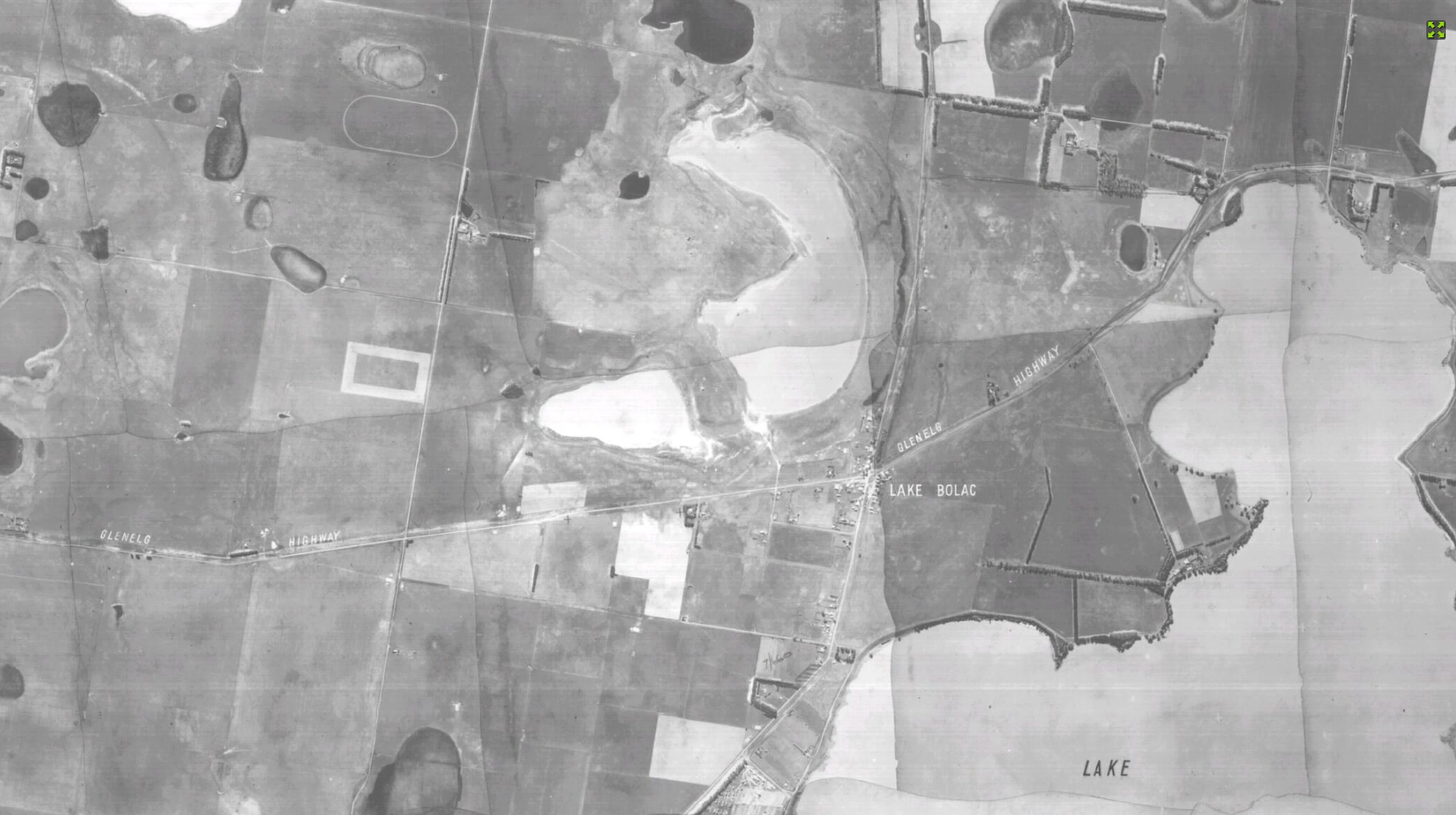 Influence of the weather

Lake Bolac is a eutrophic (high nutrient) warm, polymictic (turns over many times = well mixed) lake that develops a temporary thermocline (distinct temperature gradient from top to bottom) on a daily basis when the weather is warm and still (days in summer). The mixing of the lake is via wind, the fetch of the lake is extensive for all wind directions. It does not experience ice cover, and naturally dries out during extended periods of low rainfall.

Lake Bolac faces a range of challenges that need to be addressed for it to function as a healthy and resilient lake system. Current problems includes poor water quality, algal blooms and midge infestations. These are a consequence of high nutrient loading, and an unbalanced food-web. The other sections within the Lake Bolac menu address these issues in more detail.