What did pre European Lake Bolac catchments look like?

The original people of Western Victoria have a deep relationship with the land. Some of the intricacies of this relationship were recorded by James Dawson in Australian Aborigines (1881).

Thomas Mitchell passed close to the Fiery and Salt Creek catchments in 1837, and described the land from his perspective in chapter 3.12. of his book Three Expeditions into the Interior of Eastern Australia, Vol II.

The images below show the likely pre 1750 vegetation across our catchments. These maps and further information can be found in our 2016 Biodiversity Blueprint (pdf). 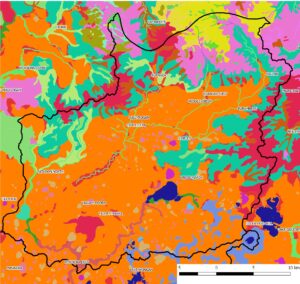 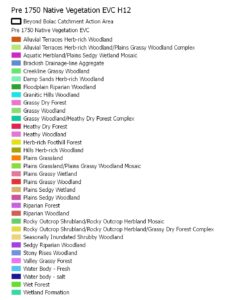 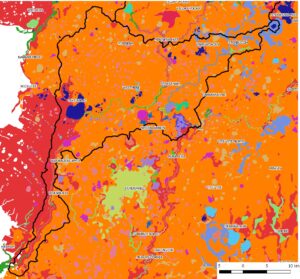 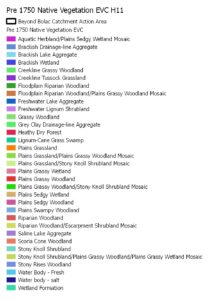 Changes with the arrival of Europeans

Some of the earliest European settlers in rural Victoria wrote first-hand descriptions of the land and their experiences. One collection is in the book Letters from Victorian Pioneers, written as a tribute to Governor LaTrobe when he left the colony in 1853. The Fiery Creek and Lake Bolac areas are mentioned in letters from Alfed Thompson, Thos Chirnside and Colin Campbell.

James Bonwick had a naive view of Western Victoria, but wrote detailed descriptions of his 1857 travels in his book Western Victoria: its geography, geology and social conditions.

Agricultural intensification increased with closer settlement schemes in the early 1900s. An example of the attitudes towards the land around the Lake Bolac district at that time is given in the Ballarat Star newspaper series of aticles From Linton to Lake Bolac: Tapping Western Victoria (12 December 1904).

There have been major historical physical changes to the Fiery and Salt Creeks and to Lake Bolac since European settlement. These are summarised in the EPA 2007 publication A review of historic western Victorian lake conditions in relation to fish deaths.