Past weather
The Bureau of Meteorology has archived a wealth of historic weather records. Recent data for specific weather stations in Victoria can be accessed here.

Runoff in the H11 H12 catchments

The Bureau of Meteorology also has modelled data for the last 10 years for a range of weather dependent characters, including for evaporation, soil moisture, calculated runoff and deep drainage. It can be used day, month or year periods within the last ten years on a 5 km grid scale. This BOM Landscape Water Balance webpage can be accessed here.

The BOM calculated runoff values for the H11 H12 catchments for 2016 are in the range of 10 to 60 mm for different locations. By comparison, their values are between 2 and 10 mm annual runoff for each of 2014 and 2015. This shows just how strongly that runoff is influenced by variations in seasonal weather conditions. 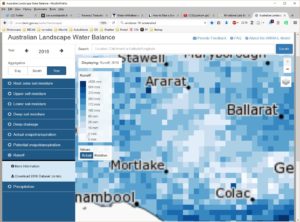 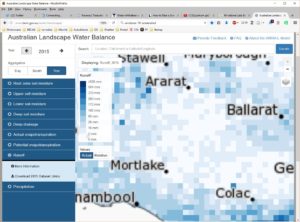 Future climate in the H11 and H12 catchment regions
Average rainfall is projected to decrease over time in SW Victoria, especially during winter and spring, even though it is probable that extreme rainfall events will become more common. This, combined with a high confidence of higher temperatures means that runoff is likely to decrease, especially in southern Victoria (Post et al., 2009). The degree of change from current conditions will be highly dependent on the actual CO2 levels that occur (Timball et al., 2016, Potter et al., 2015).

The Glenelg Hopkins CMA has a climate change strategy document which includes the likely impacts and planned responses across the CMA region.